For Critical Strike fans, this is the one. Combine with level 3 Critical Strike and Nextor Crystal for some heavy damage. Helps a lot for low damage Dex based. Crystal Phond : Might be useful against those who are highly resistant to energy. However, I found that using a simple Long Sword works better. Great crystal for LS. Even if you use Critical Strike, consider switching this one for Nextor. The two special colour crystals of Yavin IV are also great.

I'll have to check them out again to see what each one does, but if I remember correctly, they are both great. The only extra advice I can give is stay away from crystals like Bondar stun , since most enemies will save later on. When you have nothing better, it's great though. I really suggest you read a specialised guide on crystals It helps a lot, and they might have some juicy information I forgot to add. Browse around, I get what you like.

This build is rather straightforward. Also, since there are not a lot of skills in this game and they are not very useful later on, for a Guardian , I can't do like I did with my Ranger guide and give tips for the gameplay. That's all you need to know. Don't underestimate normal attacks though. Sometimes, they can be more effective. The animations are usually better, also. It's sad, but there's nothing to add here. Especially since you're a Guardian, you don't need a lot of strategy I figured I might talk a little about equipment instead, so let's start with sabres.

Some people like to carry different sabres on them.

One is for Critical Strike, one defensive and one for general situations. That's actually a great idea, though not very RP friendly. So you have to go to the inventory screen each time you want to switch. Not really cool. For the armour, I generally keep robes. First off, a Jedi in an armour is just not right I don't really like Vador Second, it limits some force powers, including the great Force Aura and Speed. 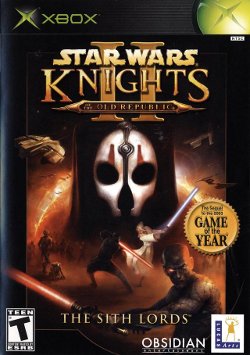 Strength based characters might want an armour, but with Speed and Aura, I think your AC would be better anyway. So I'd go with a Jedi robe, even though they don't really look cool the new robes we see in the Sith Lords trailer are awesome! I don't have much advise for those who want to use armours, so I'll just add that Cassus Fett's Battle Armour is the best available beware the heavy armour feat requirement.

For the rest, just look for mods that you like. Strength and Dexterity items are probably the most important, for both builds.

Force Speed is a very useful power. Technically, you could try to have it activated most of the time. It provides a good bonus to AC, an extra attack, and you move faster. Also great when you need to go somewhere fast. Force Aura is your big AC booster. Even though it doesn't last very long, it will make a Dex based and force speeded guardian nearly untouchable. The saving throw bonus is also welcome. This one should be cast before important duels Bandon, Malak and a girl we all know and blaster heavy fights Calo, Saul.

Lightsabre Throw is useful for talking out single targets without getting close. However, it's best use is at the end of the game. Force push is nice to use every time. If the enemies get stunned, you can land a good number of attacks without getting armed. Scoundrels like it because they can do impressive amounts of damage while the enemies are stunned with sneak attacks. Don't be afraid to use Force Persuade. As long as you stay good i.

Persuading a Czerta guy to let you park without paying is fine, but "selling" the gizka to someone is bad. Of course if you're DS there's a lot of interesting options, and you shouldn't hesitate to use it anytime you want. Force and Energy Resistance are more for occasional uses. Force resistance is only useful against Sith Masters, who aren't that common after all. Energy resistance might sound more useful because of the variety of grenades you might have to endure , but in the end I only used it against Malak because he was spamming Force Lightning too much.

You can pick these if you want to feel safe, but you should be fine with your saves. The various DS powers are quite cool to use, but they might not be as useful as their LS counterparts. Lightning should be used against mobs to soften them up, and Death Field when you need health. Grip is more for the "tilt" of using it. But I figured I might talk about it a little, because it can influence the way you build your character. Carth Onasi : Every time I hear his name, I laugh. I don't really know why, but I laugh. Even if you hate Carth, you'll have to include him in your party at least twice.

He's a quite decent ranged attacker, if you ask me. Since blasters are not so powerful in this game, being able to wield two of them makes him more powerful. He's also a fighter, so he can get that useful weapon specialisation. Don't ask why, I just don't know. He's a fine party member, but he gets less effective when you start to encounter many Sith, i. The only good ranged supporter for a LS party. Mission Vao : As with Carth, you need to include her at some point during the game.

I guess she's a fine scoundrel. Her sneak attacks are probably her biggest advantage, though I admit I used her set traps skill a couple of time when I went through Taris with a level 2 character. After Taris, I never used her.

Considering that a fighter such as Carth is having trouble defeating Sith, then I figured that a scoundrel would have an even harder time. Sneak attacks are great though. Try her to see if you like her style. Zaalbar : When I heard for the first time that you could have a wookie in your party, I thought it was awesome. Unfortunately, Zaalbar doesn't have a great personality like Chewie, and the fact that you actually know what he's saying makes him far less entertaining than his movie counterpart.

Beside the fact that he can't wear any armour, Zaalbar is still a powerhouse thanks to his incredible stats start with 20 strength and constitution Using his bowcaster is a huge waste, on the powergaming side. I use him on Taris if I need an extra meat shield like I said before, I usually stop at level 4 and some fights can be quite hard without Zaalbar's strength.

Besides the fact that she whines a lot at the beginning, she's quite nice to have around. Also, she doesn't whine that much after Dantooine. Being a Sentinel, she can fit in every party because of her versatility and I do think the designers thought about that.

She fights well, and you can develop different force powers than with your character. I like to get the Valour powers with her, since it affects everybody and I don't have to take them with my character. Her stats are quite high too. Even though many people don't think so, I consider her as one of the best NPC that can join you. And I'll say it again, not picking her completely screws the story, in my opinion.